As the final day of the month of January, today marks the last day of Howard Permut’s tenure as president of Metro-North Railroad. While 2013 was set to be a celebrated year – with Metro-North’s 30th anniversary, and the centennial of Grand Central Terminal – instead the year was tainted with mishaps and tragedies. You can say what you wish about Mr. Permut’s years as president, but it remains fact that he was a member of the team that formed the railroad 31 years ago. His insider’s perspective on Metro-North, and how it evolved over the years, made an interesting interview.

In a time where countless commuters wish to revolt, some going as far as to say Metro-North is the “worst railroad” ever or like a “horror movie,” I come with an idea many will outright refuse to accept. It is, however, the truth. Metro-North has in fact evolved over the past 31 years. I hardly believe it is deserving of the “worst railroad ever” superlative that some are attributing to it, but such a description may be apt for one of Metro-North’s predecessors.

I’m a firm believer in the adage that those who do not remember the past are doomed to repeat it. History is incredibly important, and it has been painfully obvious recently that many are deficient in that area – especially when it comes to trains. It is undeniable that Metro-North has had some major issues within the past twelve months, and there are many lessons the railroad must learn. But we must know the past to adequately move into the future – thus if one wishes to truly understand Metro-North, a little visit to the past is required. 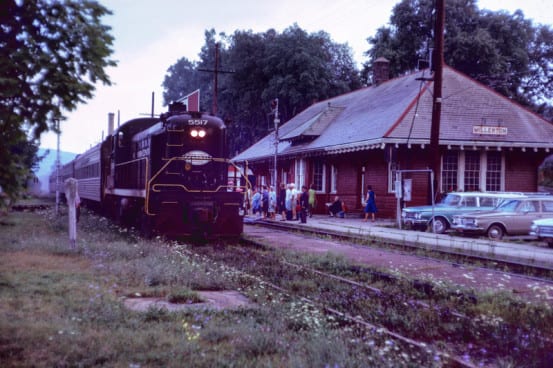 Although frolicking in a grassy meadow may be fun, for the Upper Harlem it displays neglect. Less than a decade from when this photo was taken in 1966, Millerton and the rest of the Upper Harlem was abandoned for passenger service.

We rewind the clock back to 1968 – the year of the ill-fated merger between the Pennsylvania Railroad and the New York Central (the New York, New Haven and Hartford was added to the merger in 1969). Within a scant two years the Penn Central was bankrupt – the railroad was the country’s sixth largest corporation, and at the time its bankruptcy was the largest this nation had ever seen. If you want to think of a horrible American railroad, this is where you should start – besides incompatible computer systems and clashing employees, deteriorating infrastructure led to slow and late trains, and entire freight trains went missing – crops destined for the market rotted, and with 25% on-time performance for some deliveries, companies left to find other methods to ship goods.

One of the reasons this site even exists is because of my interest in Penn Central’s abandonment of the Upper Harlem Division. On a cold March morning in 1972 the 6:55 train from Chatham to Grand Central operated as normal. However, by midday the Penn Central legally won the right to terminate the line, and fifty miles of the Upper Harlem Division were abandoned for passenger service. Anyone that came down on that morning train had no ride home – they had to find their own way. Imagine how angry people would be if Metro-North tried to pull the same stunt today! Sorry, New Haven commuters, our last stop today, and forevermore is Port Chester, and we don’t care how you get home.

Penn Central operated after bankruptcy for a few more years, until its operations were taken over by other companies. Conrail became the steward of Grand Central’s commuter lines until Metro-North was formed and took over operations in 1983. Metro-North Day One was hardly anything to rave about. This is what you’d find at Putnam Junction, aka Brewster Yard: 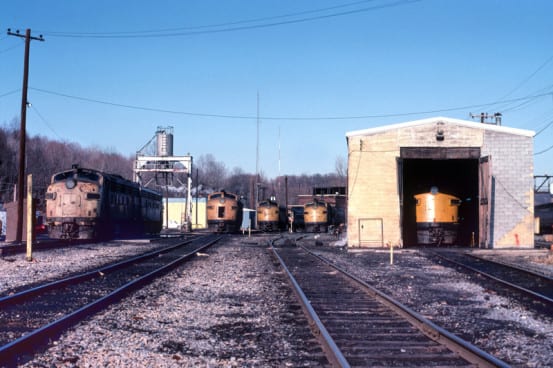 Mind you, this is what it looks like today: 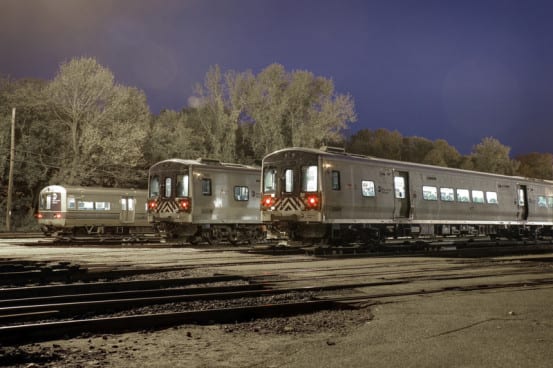 In the earliest days, it was obvious that Metro-North was cobbled together from the remains of the New York Central, New York, New Haven and Hartford, Penn Central, and Conrail. Here’s a shot from 1984 in Poughkeepsie:

Besides the obvious update of rolling stock (and you Connecticut folks can go pin your miseries in that department on disgraced former Governor John Rowland – perhaps if he cared for commuters as much as he did his weekend home you’d be a bit less miserable), Metro-North has significantly upgraded its shops to accommodate repairs and maintenance of the new equipment. The old New York Central shops at Croton-Harmon dated back to 1909, and were restored in Metro-North’s earliest years. In 2010 they were reconstructed, and the new Croton-Harmon Locomotive and Coach Shop is now a modern, state-of-the-art facility. A new shop at Brewster opened in 1987, and at North White Plains in 1993. 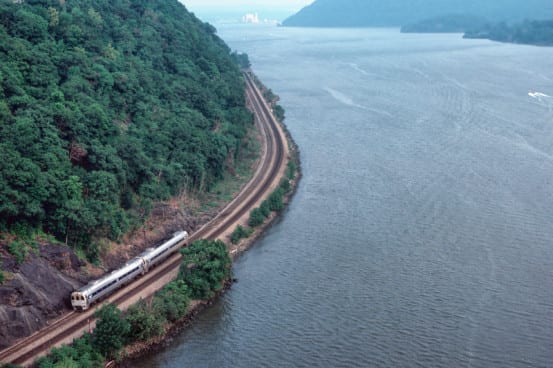 Most of Metro-North’s stations look quite different than in the past, as almost every station now has high-level platforms. New York Central engineers working on the design of Grand Central Terminal in the early 1900s clocked patrons boarding trains and calculated that riders board 50% faster on high level platforms. They also make it easier to accommodate those with baby carriages, and patrons in wheelchairs. Despite the pros of high level platforms, they were not implemented system-wide until after Metro-North took over. On average, the duration of a trip from Grand Central to Dover Plains in 1972 was about two hours and 20 minutes – today the trip takes about two hours, and note that the route is six miles longer and terminates at Wassaic. Faster boarding allows for quicker train times. 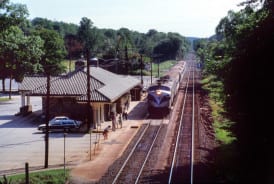 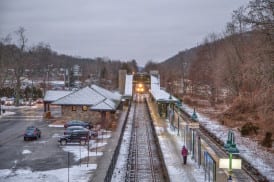 High level platforms, overpasses and elevators are just some of the changes seen here at Chappaqua. Compare 1982 to today. 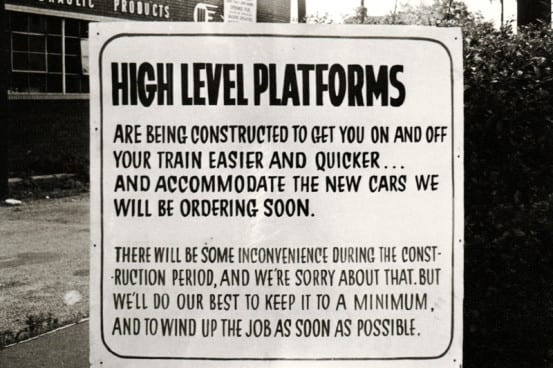 One of the most influential changes made by Metro-North was the electrification of the Harlem Line north of White Plains. Service up to Brewster became incredibly more reliable, and led to an increase in ridership. When constructed early on, Brewster North (now Southeast) was often empty – now you’ll see an immense filled parking lot with riders from both New York and Connecticut. Despite out-of-touch politicians arguing that people are packing up and leaving the area because of poor train service, or at minimum opting to drive, ridership – even on the beleaguered New Haven Line – actually increased.

Restoration of Ossining station, on the Hudson Line, and platform upgrades at Larchmont on the New Haven Line. Photos from the collection of Metro-North Railroad.

As a lover of history, the fact that many historic train depots have been restored during Metro-North’s tenure is an important point. Grand Central, Harlem 125th Street, New Haven Union Station, Port Chester, Chappaqua, Hartsdale, Yonkers, Ossining… the list could go on. It is also worth mentioning that restoration work was also performed on the Park Avenue Tunnel. I appreciate the efforts of the railroad, of the communities, and of the state to preserve our history.

Metro-North has also opened several stations over the years, on all three lines. The Harlem Line was lengthened to Wassaic, the Yankees E 153rd Street stop makes it easier for people to get to the baseball game, and two different Veterans Hospitals are accessible from Cortlandt and West Haven stations. Even the famed Appalachian Trail now has a train station along the Harlem Line.

Looking to the Future

No railroad wants to have late trains, but unfortunately it has become a fact of life for Metro-North. After the derailment at Spuyten Duyvil speed restrictions can be found on all Metro-North lines (especially the New Haven Line). Perhaps in the past there were safe spots that engineers could “make up time,” but they are no more. However, it is incredibly irresponsible to pretend that all methods of transit are at a hundred percent, all the time. Everyone always has the option to drive, and maybe you’ll even get there on time – provided that I-95 isn’t shut down because of an overturned truck, that the Saw Mill isn’t closed because of flooding every time we get a good rainstorm, or the Taconic is closed for construction. Plus we all know that nobody ever sleeps in airports because flights are delayed for days, and that multi-car pileups are pure fiction.

No commuter wants to ride a late train, but make some friends, try to enjoy your ride home. There are very few times that the train has gotten me to work seriously late, but I can count plenty of times that driving coworkers have been late due to traffic, construction, or other accidents. Take it from 50 year Harlem Line commuter John F.:

In 1964, I started riding the New York Central train from Bronxville to Fordham University in the Bronx every day. I have enjoyed commuting via the Harlem Line most years ever since. Perhaps the best part has been and continues to be the friends I have made on the train over the years with conductors and fellow passengers. I’ve been fortunate enough to meet some fascinating people who have enriched my life. My goal is to continue commuting and making friends until 2026.

Fifty years ago, commuting was an opportunity to relax, play cards and chat with friends you saw everyday. When we all get bored with our laptops and cell phones, I hope that the opportunity to engage in good conversation with conductors and fellow commuters is still there.

In closing, Metro-North has much potential for greatness, and we wholeheartedly welcome the very well respected railroader Mr. Joseph Giulietti in his position as president of this railroad (effective February 10th). Similar to Mr. Permut, Mr. Giulietti was around for the fledgling Metro-North Commuter Railroad’s earliest days. He understands the past, and undoubtedly has aspirations for a bright future. I will be happy to see this railroad further evolve, and hey, Mr. G? Want to do an interview? Come talk to me!