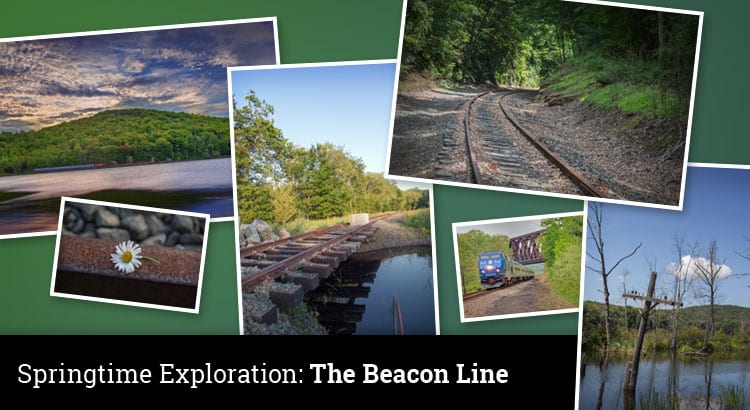 As April has now arrived, we look forward to the spring, to warmer weather, and lovely green leaves on the trees. It seems, as well, like a decent time to explore some of the lesser-known railroad infrastructure in the area. Most regular riders of Metro-North are familiar with the railroad’s three main lines running into Grand Central Terminal – the Harlem, Hudson, and New Haven Lines. Others may be aware of two other lines on the west side of the Hudson River that Metro-North also owns – the Port Jervis and Pascack Valley Lines – which are operated by New Jersey Transit. But far fewer are familiar with Metro-North’s sixth line – the Beacon Line. Purchased in 1995 by Metro-North, the line has been, for the most part, inactive since. Occasional excursions, equipment moves and storage, and maintenance with hi rail vehicles, have all taken place, albeit infrequently. Though the rails itself may not be in use, running along parts of the line is fiber optic cabling that is integral to Metro-North operations. 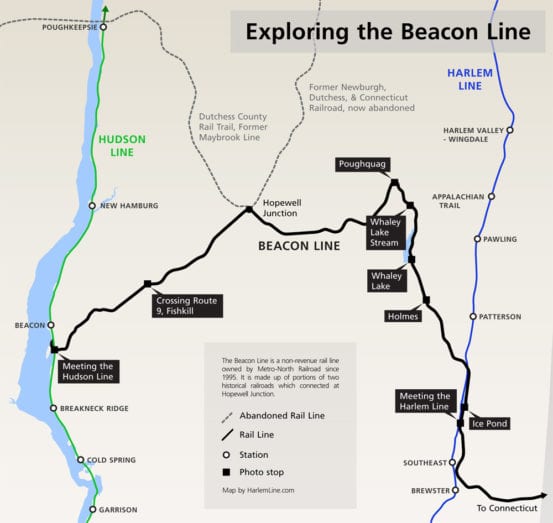 Map of the Beacon Line showing the locations of the photos in this post, as well as the two historical rail lines.

Last fall the Beacon Line made the news as the MTA has issued a “Request for Expressions of Interest” regarding “all or part” of the line. The RFEI will be used to gauge interest in the line, and to see what people would actually want to do with it – but it is worth noting that the RFEI was strictly for informational purposes, it was not a formal Request for Proposals. Since the request closed last year, we’ve heard little from Metro-North about the proposals submitted and what anyone’s ideas for the line were. Any serious rail project would be difficult on the Beacon Line, and likely expensive. While Metro-North has not let the line become completely overgrown – weed spraying, fallen tree removal, and other minor maintenance happens occasionally – it isn’t in the best shape. Many bridges are in rough shape, needing costly maintenance. Years of people using the line as an ATV trail has led to severe degradation of the railroad ties, and in many cases the rails are old and in need of replacement.

Beside the condition of the line, making money on it would be another difficulty. Multiple studies have been performed in terms of reactivating all or some parts of the Beacon Line for passenger use, and all have pretty much determined that it is not economically feasible. One of the more promising ideas would be to operate a shuttle from Danbury to Southeast on the Harlem Line, a plan that was amusingly championed by politicians in upper Westchester County who would much prefer those Connecticut commuters to not come over to their stations on the Harlem Line (I’m looking at you, Katonah). Upon formal study, several difficulties were noted with the idea – the major one being the way that trains from the Beacon Line merge with the Harlem Line. With the current track alignment, any train coming from Danbury would be facing north when coming onto the Harlem Line, the wrong direction from Southeast station. Either the train crew would have to “change ends” and the train would go the opposite direction (which would take too much time due to procedural requirements like a brake test), or a wye track would have to be installed allowing the train to turn south onto the Harlem Line (difficult, as the land around the junction is protected wetlands, and would likely have to be acquired through eminent domain).

In the end, nothing may actually come out of this whole RFEI process besides calling attention to the nearly abandoned Beacon Line. I thought it might be an interesting time to take a little virtual tour of the line, as I’ve visited and photographed various portions on both sides – Brewster and Beacon. The two sides designation is somewhat important, as even though the line may be seen as one whole today, historically the Beacon Line is made up of two previous railroads. The eastern part of the Beacon Line that runs from Connecticut to Hopewell Junction is the former Maybrook Line. As one would expect, that line ran through Maybrook, New York and crossed the Hudson River at Poughkeepsie. After the fire on the Poughkeepsie Bridge in 1974, the portion of the Maybrook to Hopewell Junction was abandoned, and today is a rail trail. The western portion of the line, from Beacon to Hopewell Junction, was originally part of the Newburgh, Dutchess and Connecticut Railroad, later called the Beacon Secondary. The rest of the ND&C, which went beyond Hopewell into Millbrook, Pine Plains, Millerton, and Connecticut, had been abandoned in stages in the 20’s and 30’s.

Junction with the Harlem Line & the Ice Pond

The start of our explorations begin where the Harlem and Beacon Lines meet, a little less than halfway between Southeast and Patterson. As mentioned previously, there is no wye here, so it would be difficult to run trains from the Beacon south along the Harlem toward Brewster without a time consuming changing of ends. The lines meet and then diverge again, running along either side of the Ice Pond. Just beyond that body of water, the Beacon Line crosses over the Harlem Line and continues west, while the Harlem continues north. Here is the domain of fishermen, who spend entire weekend days with their pickups parked alongside the line. 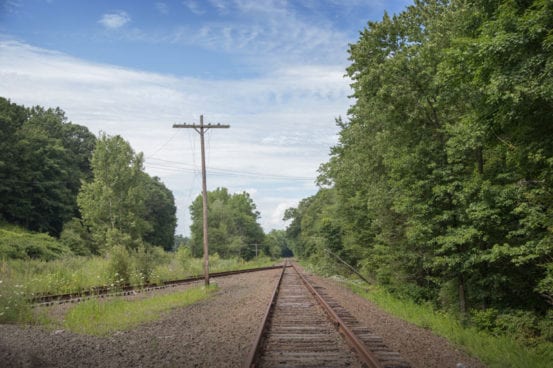 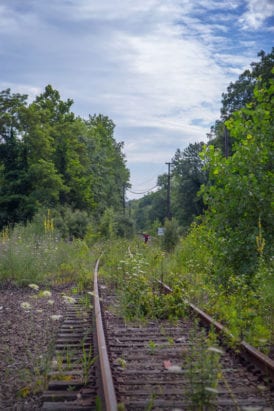 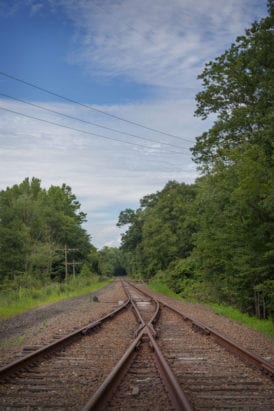 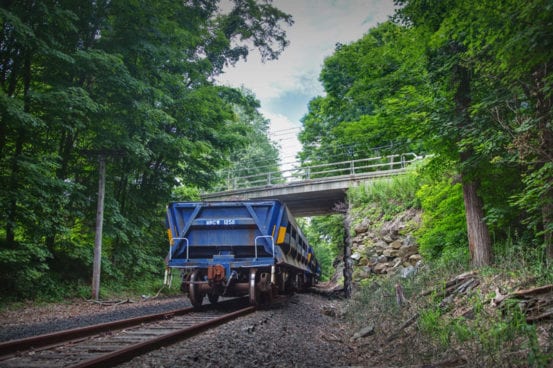 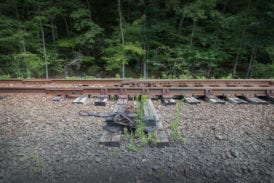 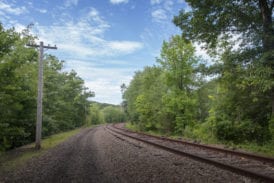 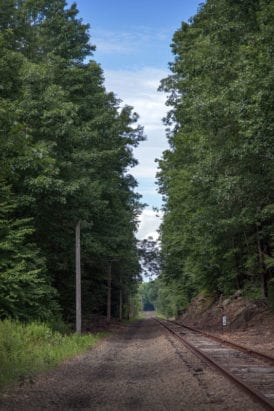 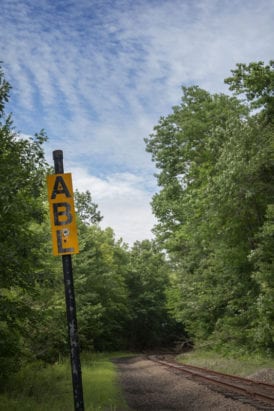 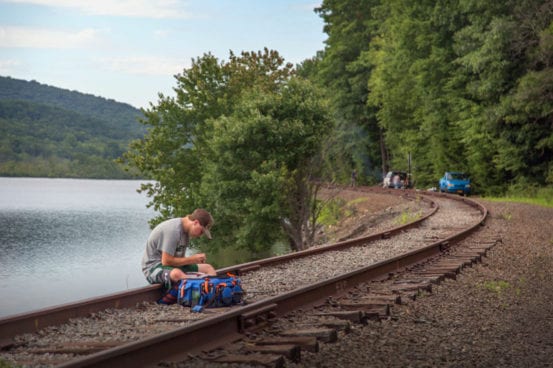 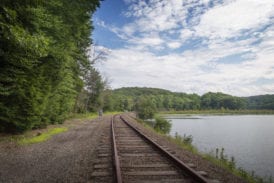 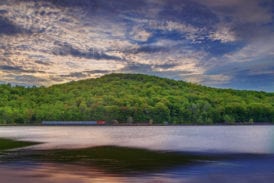 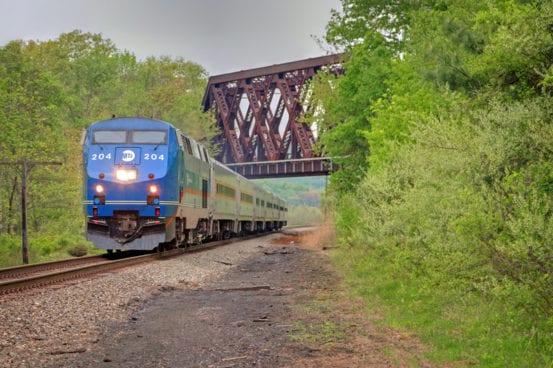