Before photographs were commonplace, engravings were often used to illustrate magazines, newspapers, and timetables. An artist would create their image on a plate—usually copper or zinc—and the plate could be copied again and again. Engraving is a little bit of a misnomer, referring to just one technique of Intaglio printmaking. There were several ways to create an illustration on a plate, including using wax and an acid to “bite” linework into the plate, a technique called etching (something I enjoyed while in art school, although I was quite terrible at it).

Once an artist completed a plate, ink was applied and then wiped off the surface. Nestled in the grooves of the plate, the remainder of the ink yielded a transferred image when when applied to paper and run through a press. Although the image would be nearly the same each time, artists could always make slight variations with different colored inks, or by cropping out areas of the image. Eventually, the plate would wear out and a new one would be created, sometimes very similar to the first. 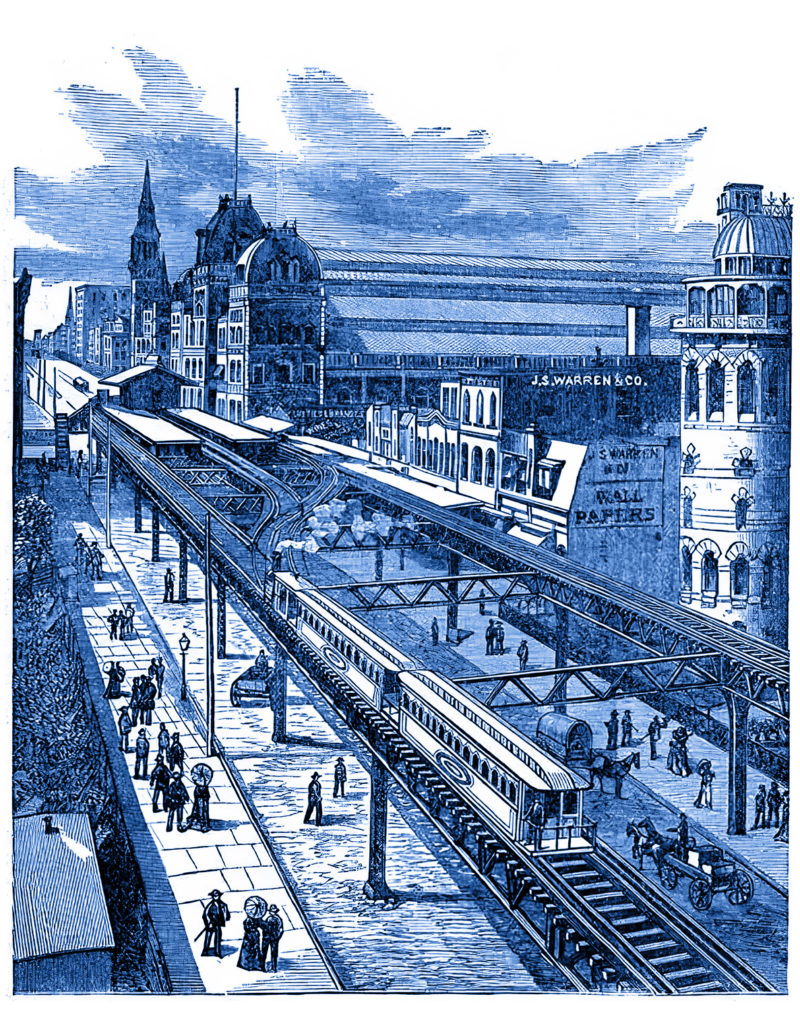 Vertical version of the elevated railway engraving, with the Depot in the background. Print is from 1878. 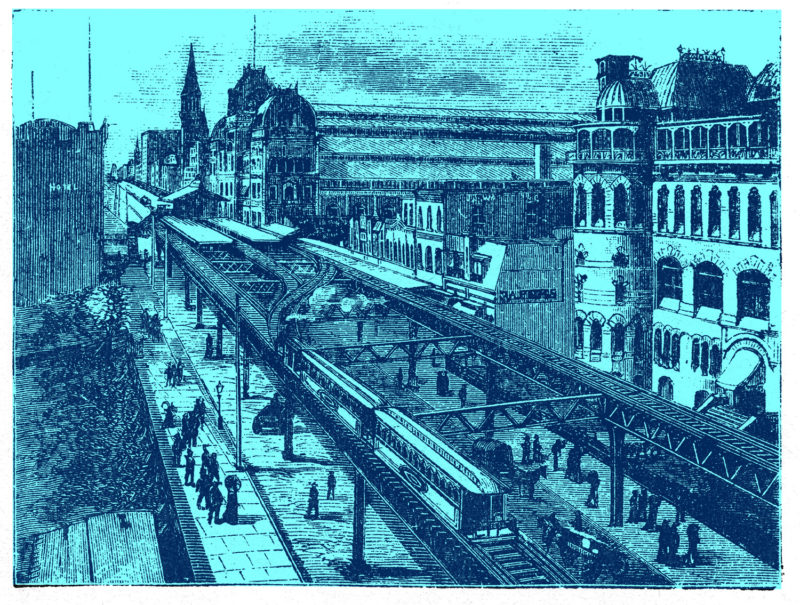 Horizontal version of the elevated railway engraving. The two are nearly identical, but were slightly altered to fit the publication. 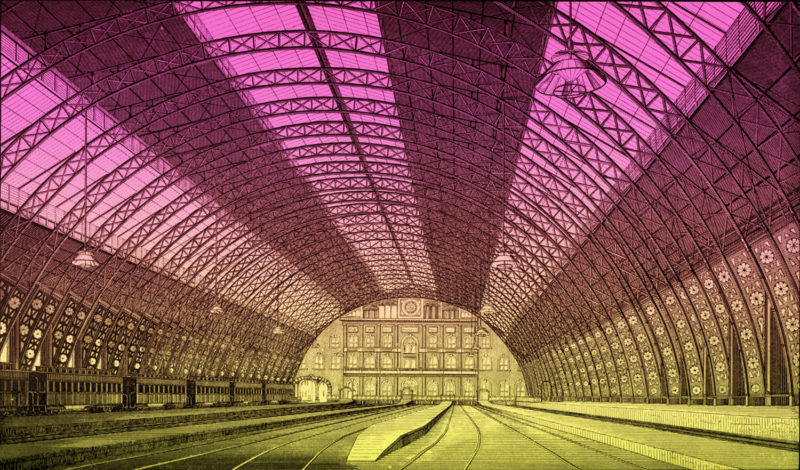 Three similar renditions of the train shed, this one is a bit lonely. 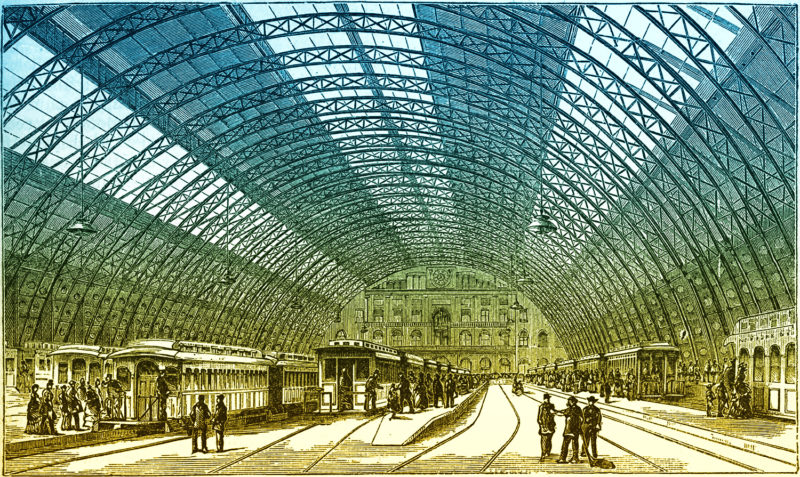 Three similar renditions of the train shed, this one at a lower angle. From Harper's Weekly. 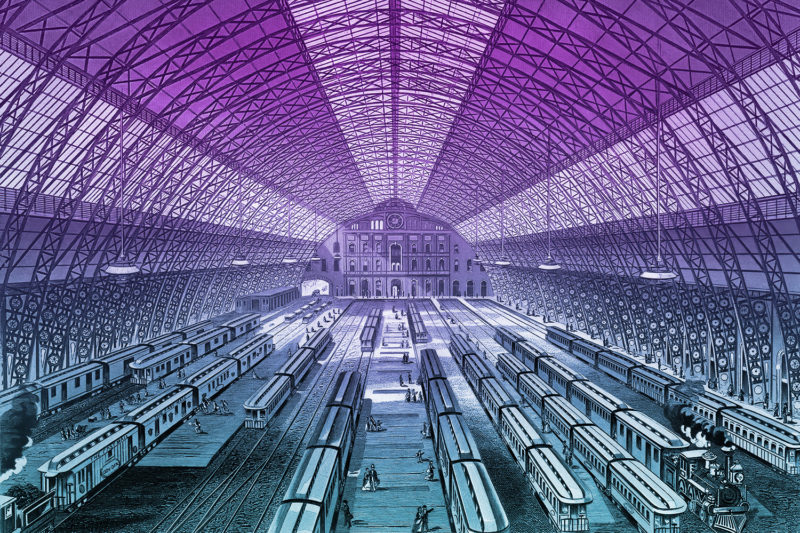 Three similar renditions of the train shed, this one with some trains.

Above: Two printings of an identical plate, though cropped to make a vertical or horizontal image.
Below: Three very similar illustrations of the train shed. The plate for the image at left was likely a reference for the illustration at center.

When thinking about creating a post of illustrations and prints from the old Grand Central Depot, I thought that a bunch of black and white illustrations might be a tad boring. If I had the original plates I could reproduce many of these images in an array of colors, but since I don’t, I can simulate it in Photoshop. Just like my time spent in the print shop, it’s always a fun thought experiment to try different colors and inks. Some may look good, others not so much. It is a fun exercise, at least.

So, enjoy a colorful look at life at Grand Central Depot. Some of the illustrations come from timetables, others from publications like Harper’s Weekly and The Century Illustrated. A good portion of the illustrations come from Orson Lowell, who spent time at the station observing passengers and recreated the moments in time where a couple missed the last train, or the “human medley” found in the waiting room. Perhaps you may even learn a new fact—for example, did you know the Depot’s baggage room was nicknamed “the morgue?” 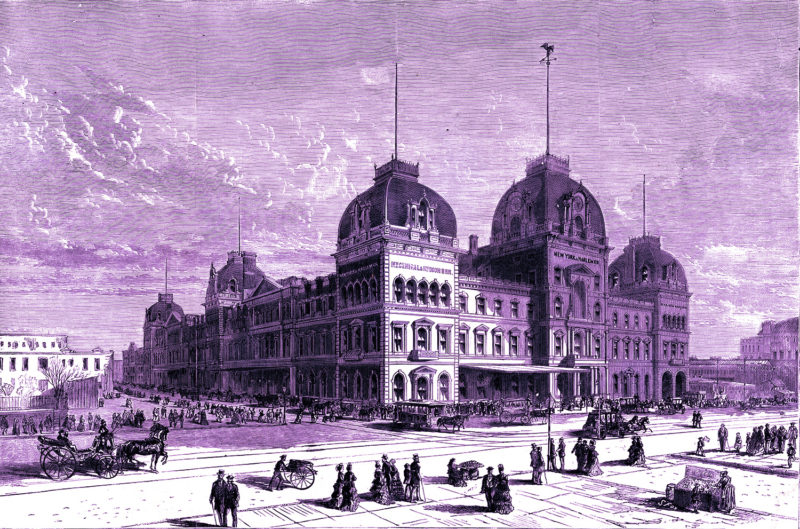 An engraving of Grand Central Depot. This image was frequently used and reused on timetables and other marketing. 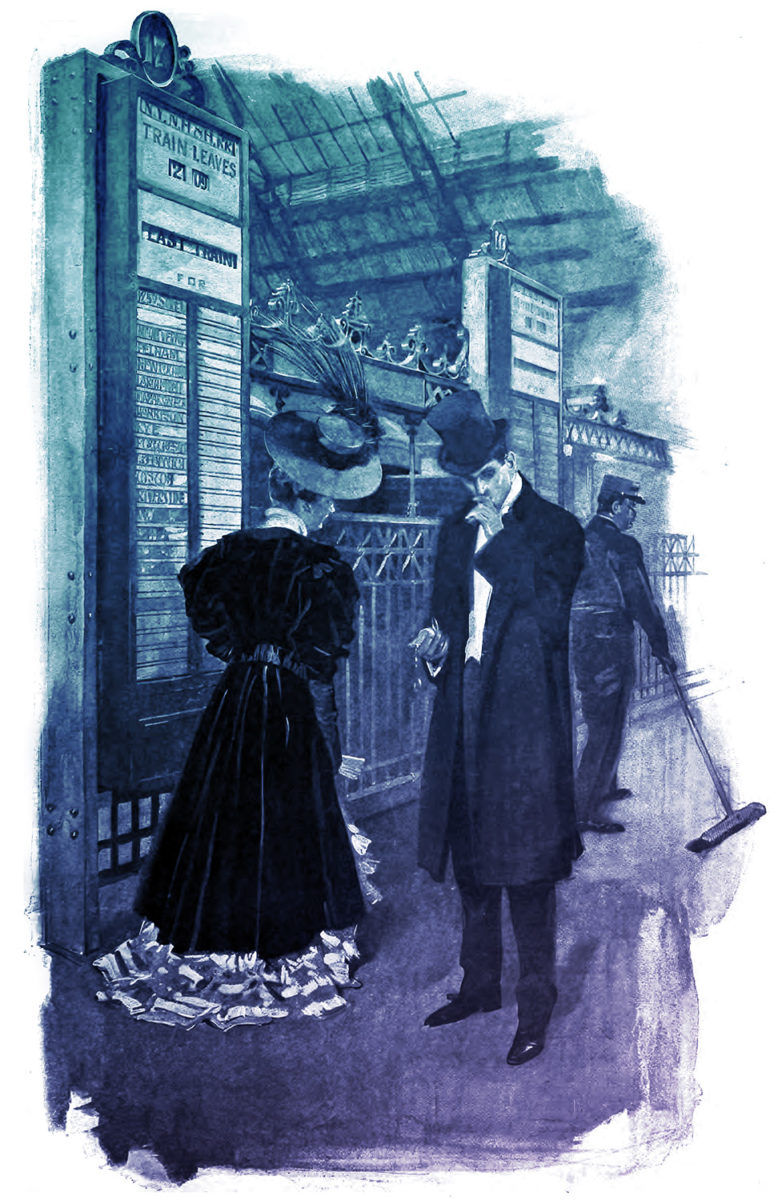 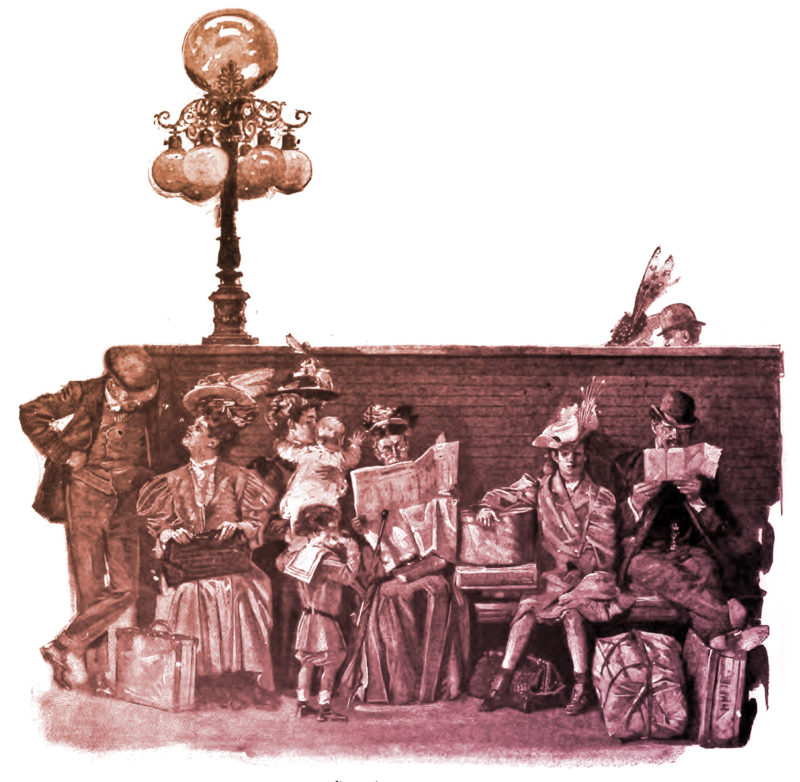 "The Human Medley" by Orson Lowell - an assortment of passengers await their trains on one of Grand Central's wooden benches. When the Depot opened each of the three railroads had their own waiting rooms. By this time there was one combined waiting room. 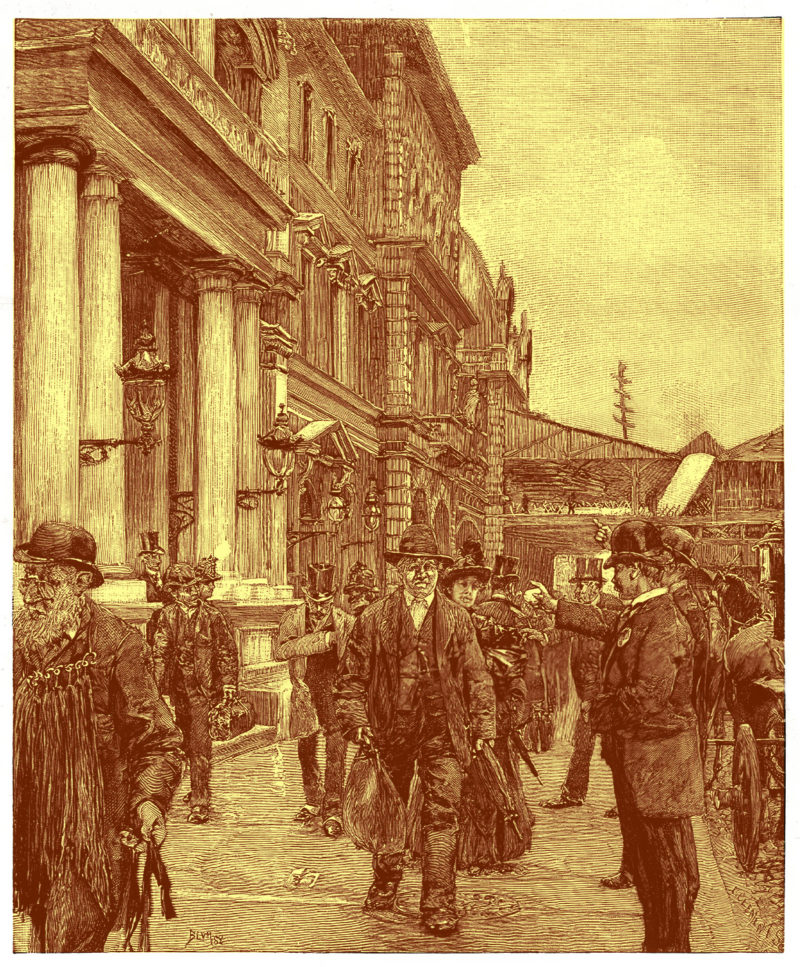 Travelers outside of Grand Central Depot. The decorative columns marked the center front entrance of the station, under the name New York and Harlem Railroad. 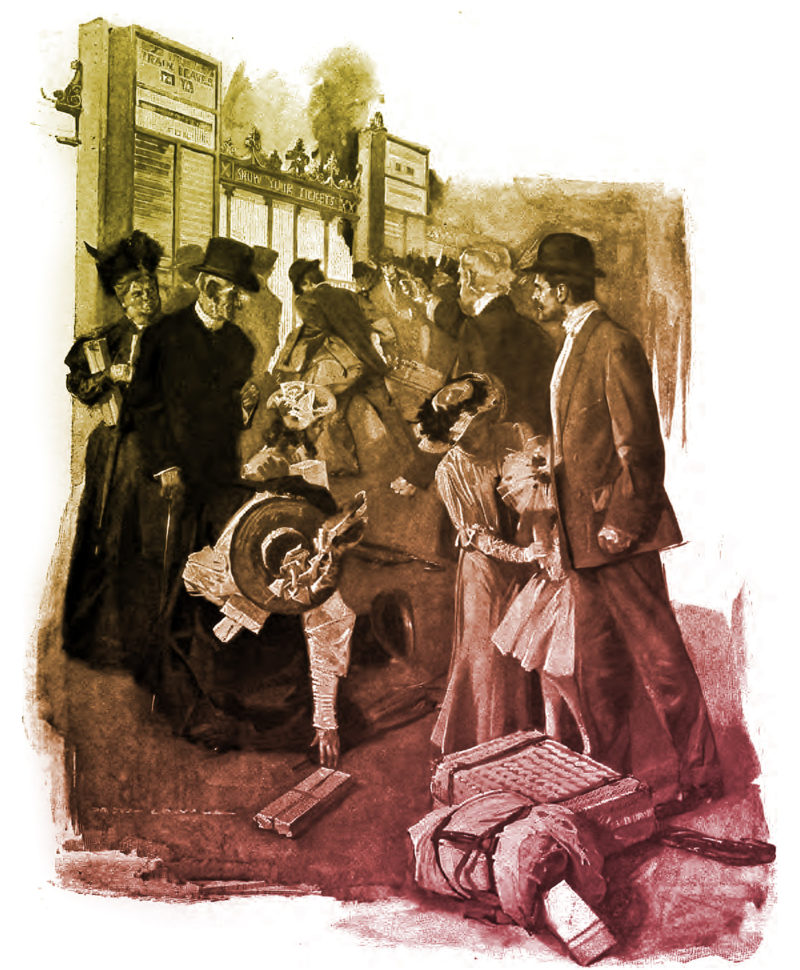 "He Catches the Train - But Spreads Confusion" by Orson Lowell 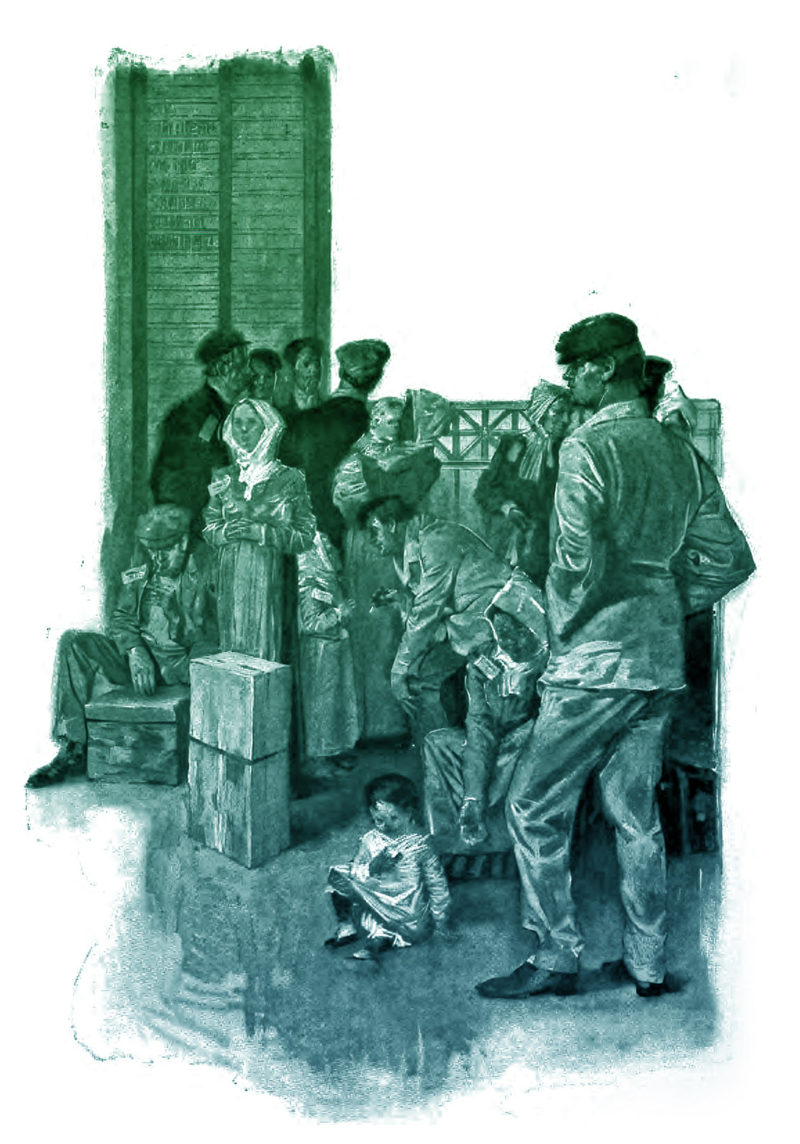 "All there, but the timetable says 'daily except Saturday' - and today is Saturday" by Orson Lowell 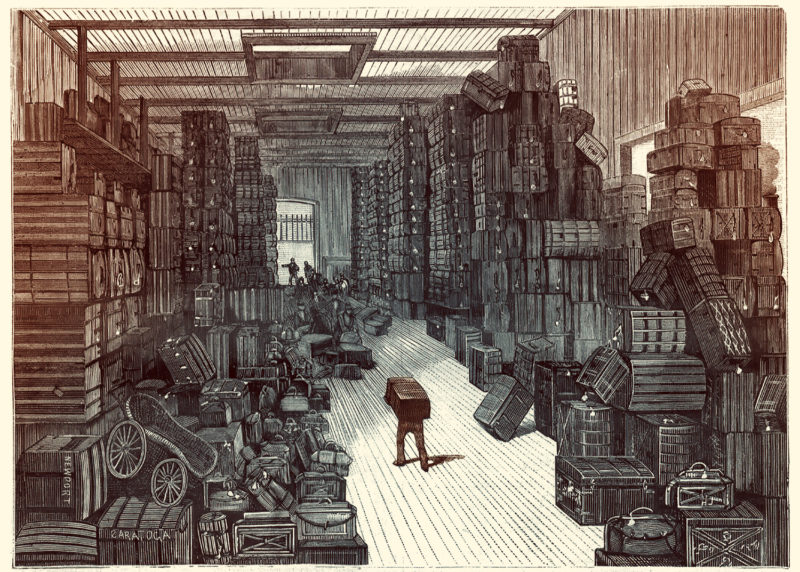 The baggage room at Grand Central Depot had the nickname, "the morgue." Though slightly macabre, the railroad was frequently tasked with transporting corpses to Woodlawn and Kensico cemeteries, and beyond. 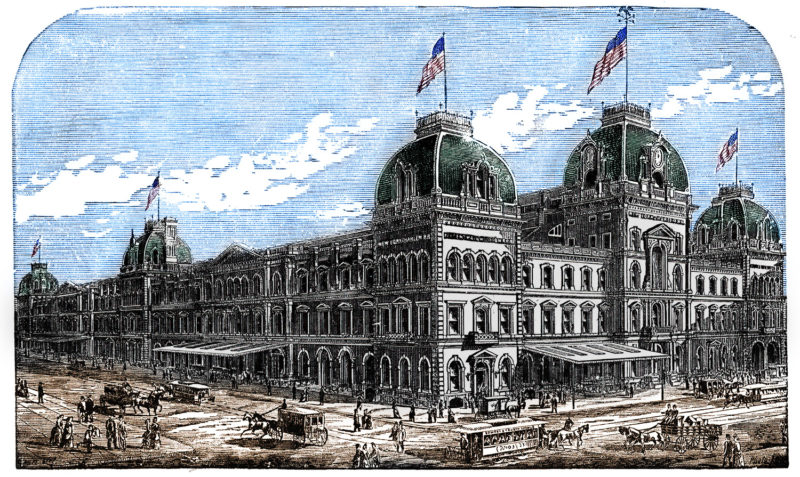 Similar to the first engraving of the Depot, this one depicts flags on each of the poles. 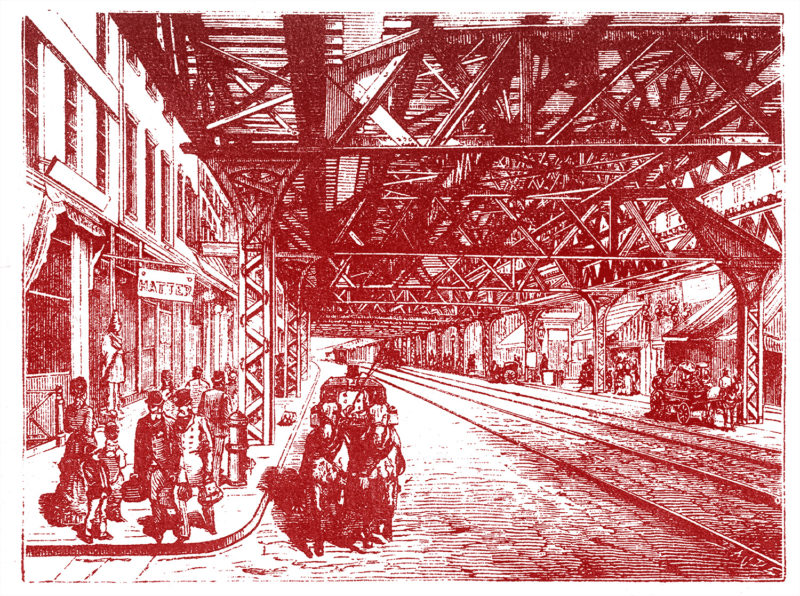 Under the elevated railway near Grand Central Depot, 1878. 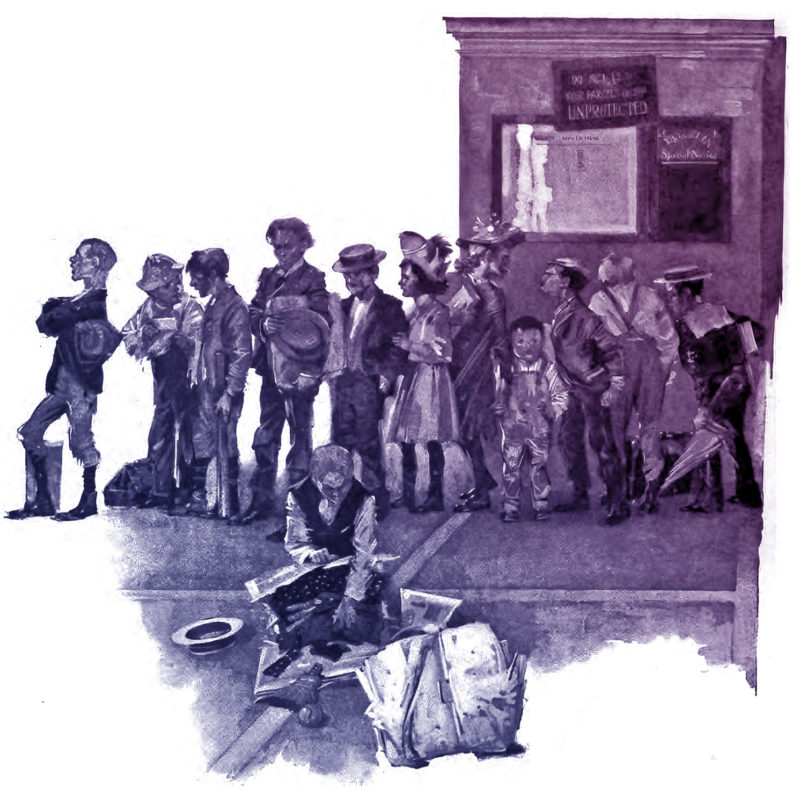 "Fresh Air Children Waiting for a Train" by Orson Lowell 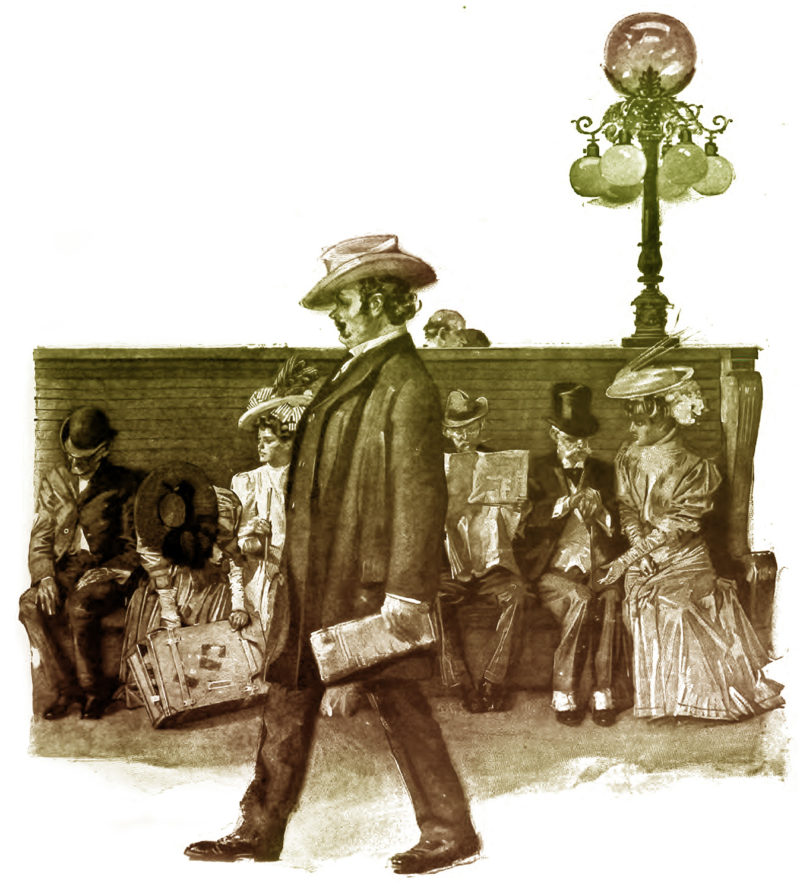 "The Human Medley" by Orson Lowell, a companion image to the first waiting room image, showing the other side of the bench. 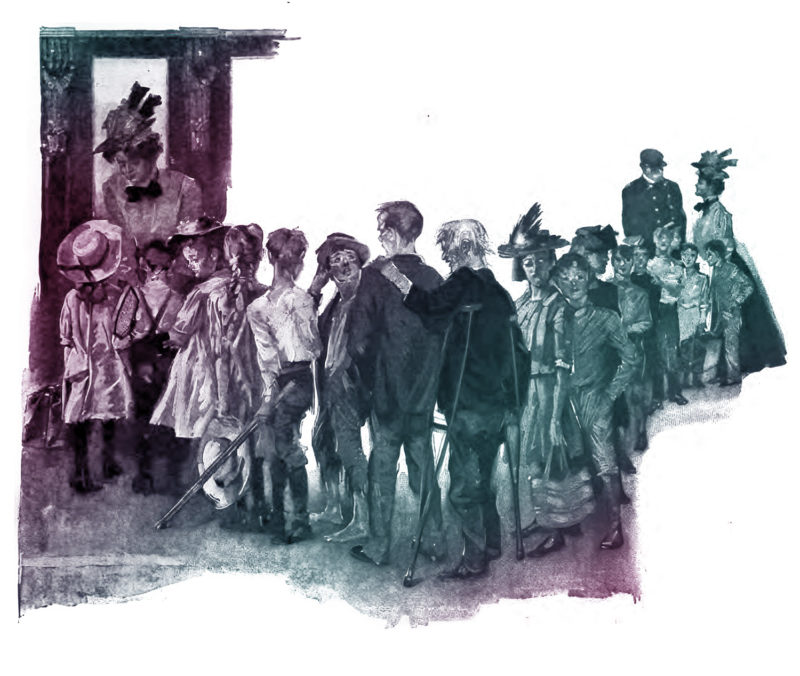 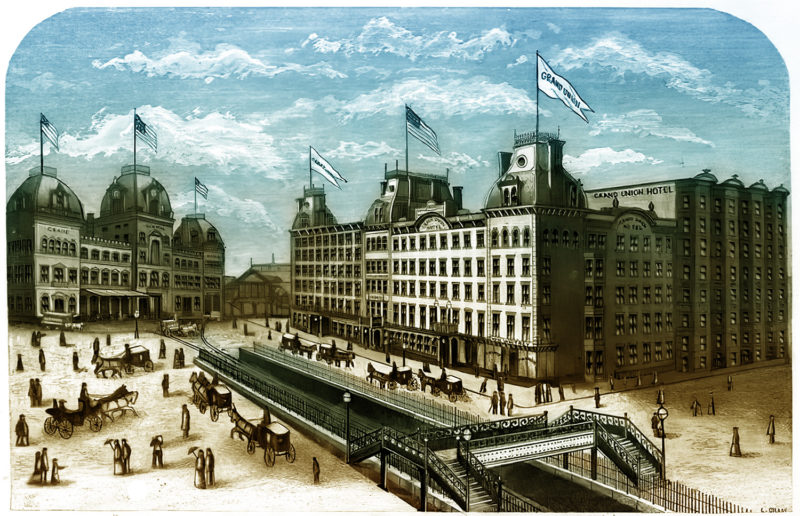 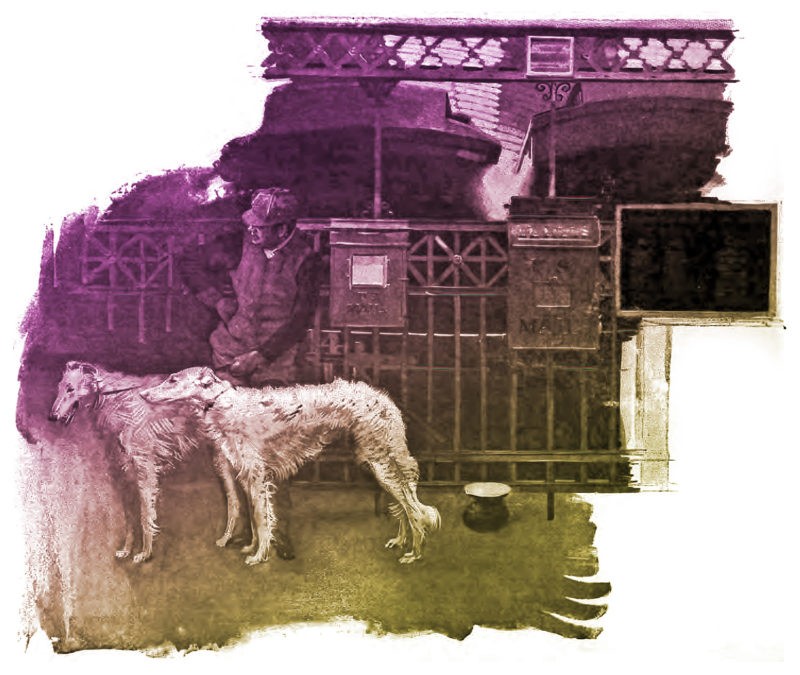 "Waiting for Somebody" by Orson Lowell. Two dogs wait for their master at Grand Central Depot. 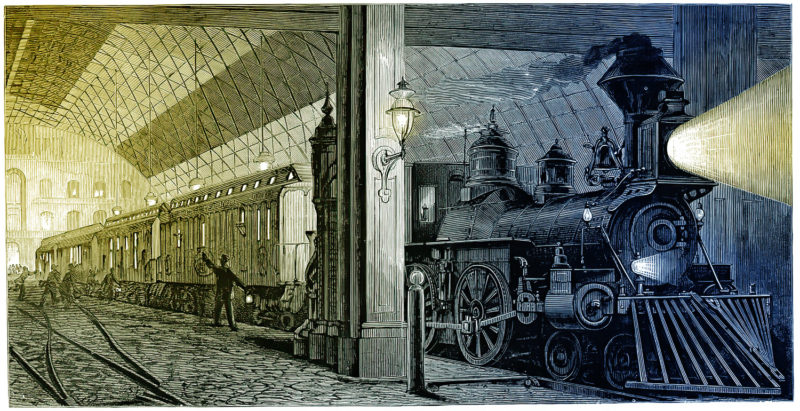 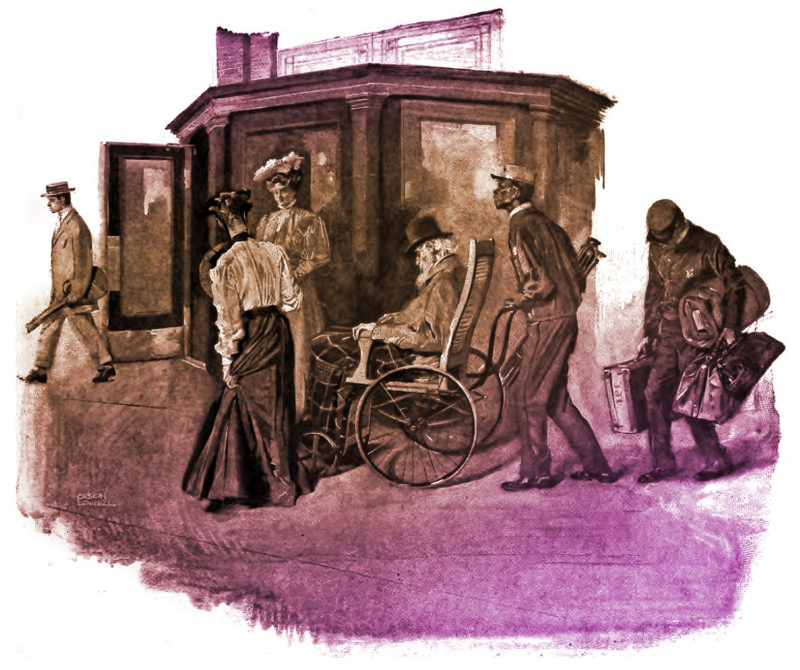 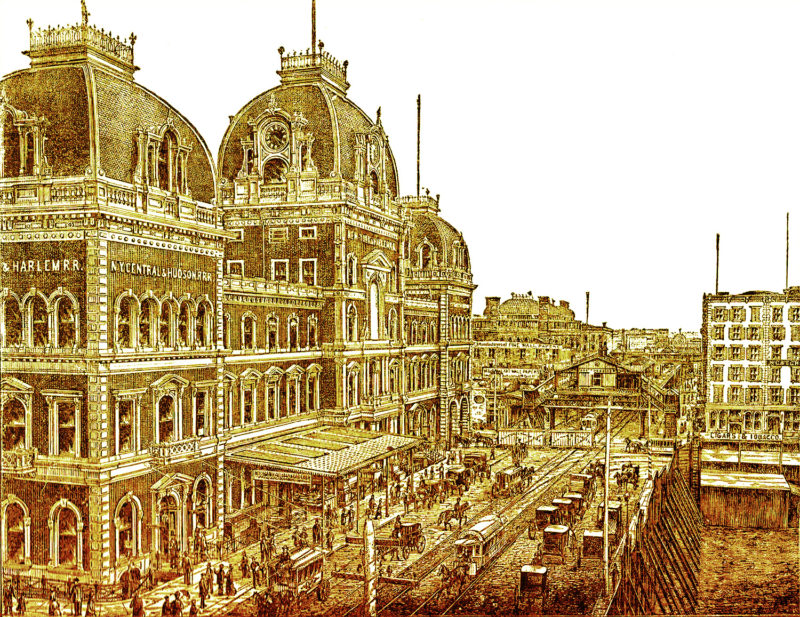 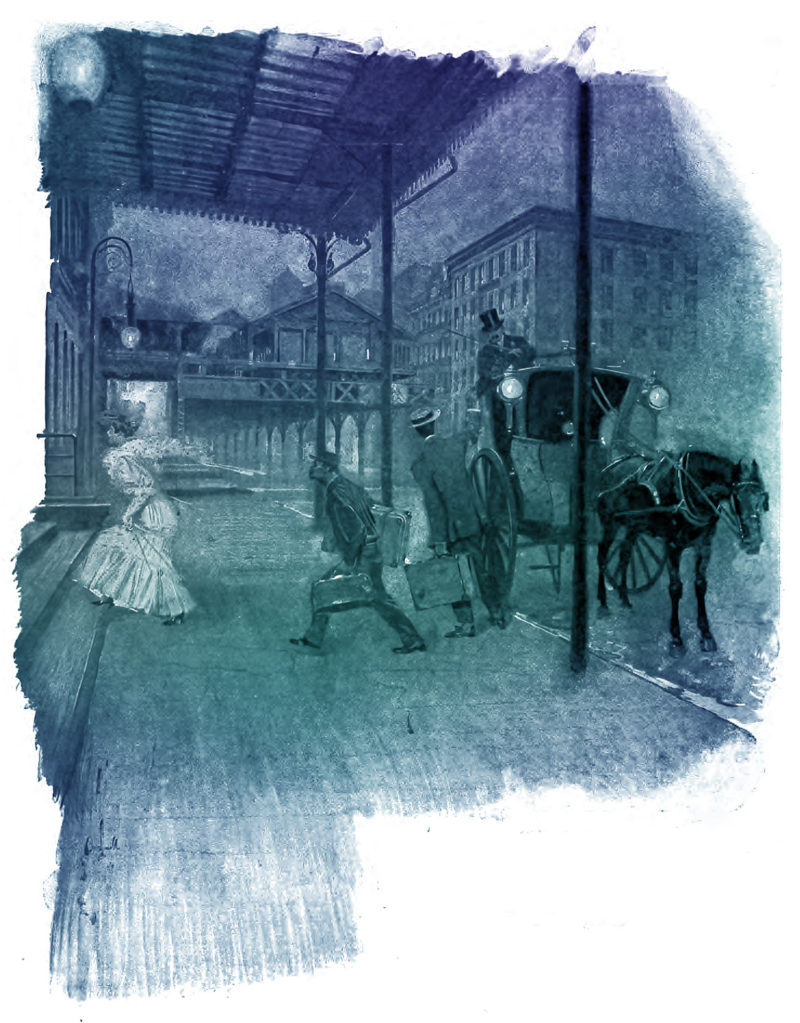 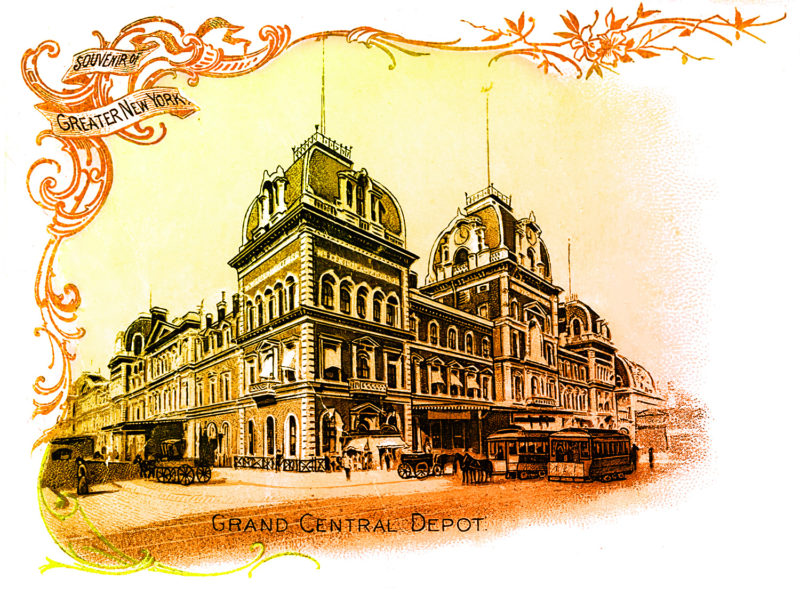 This etching of the Depot was used as a souvenir postcard 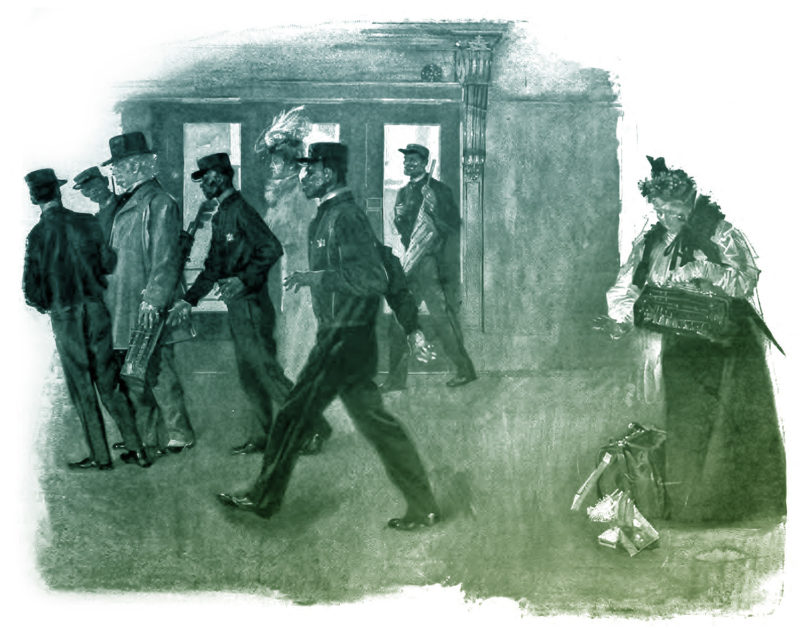 "Competition for a Tip" by Orson Lowell 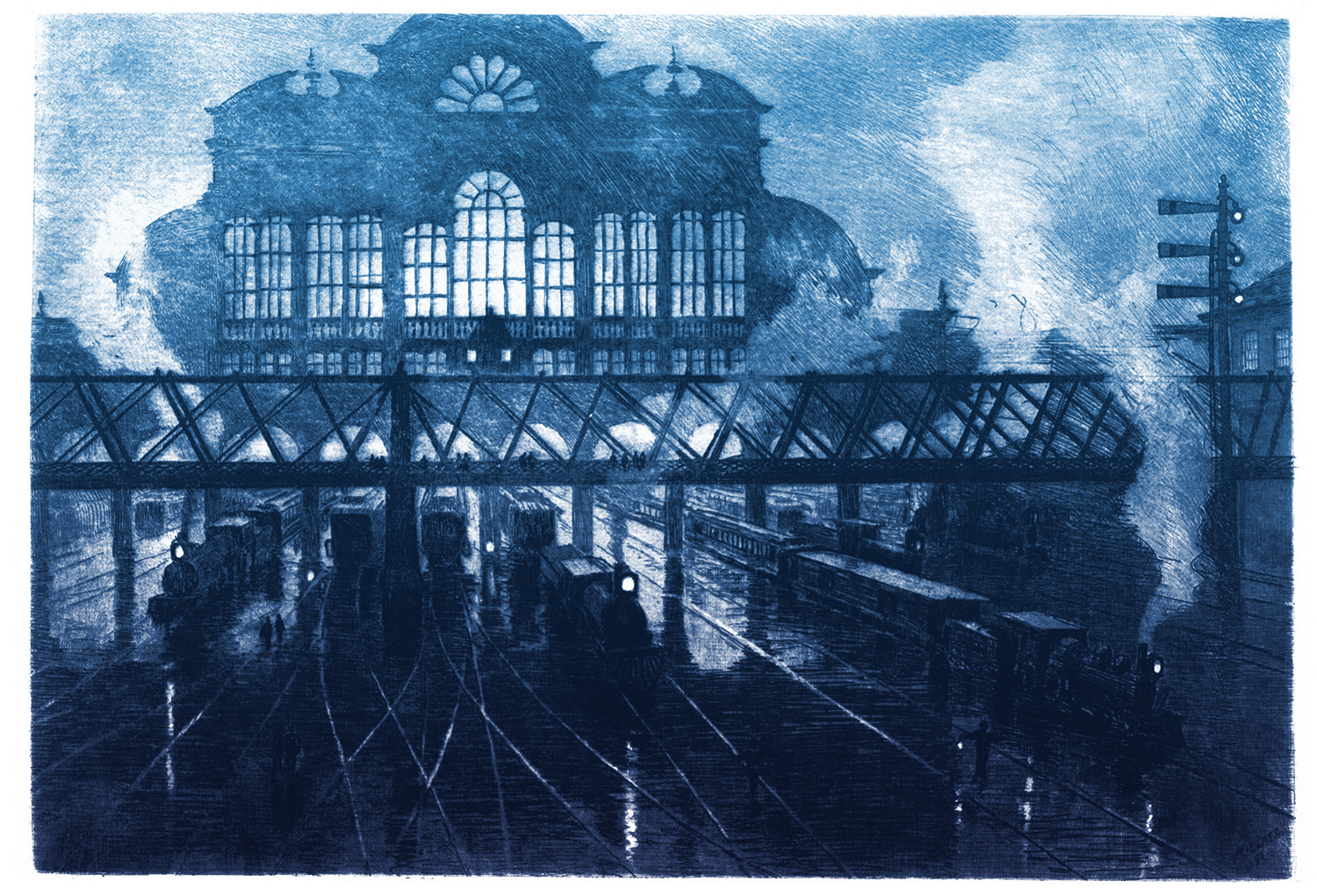 Charles Frederick Mielatz's Grand Central at Night. Etched onto a plate, the resulting print was produced in various colors - the Smithsonian owns one in black, the MET green. This version imagines a blue-toned printing.

If you’re interested in reading more about life at the Depot, I recommend the Century Illustrated’s article “The Gates of the City” which can be found here. Both the author and the illustrator observed the goings-on at the station and astutely encapsulated the lives of various travelers, especially commuters. I will leave you with an excerpt of their story…

Those who come and go we call commuters, and they are usually pictured as in a great hurry, carrying several bundles. These make up the great bulk of the crowd that jostles its way morning and evening through our city gates, predominating all other types of travelers…

Commuters acquire in time a similarity of expression as they pass in and out through the gates. They have an air of accustomedness to their surroundings, quite as if the station were their familiar club. For that matter, many of them use it as such. When the inspiring mega­phone-man announces a train, they do not seem to be startled, like the poor, panicky woman with the many babies and bundles. The commuter is often in a hurry, but he is seldom flurried; he nods to passing ac­quaintances, or keeps on reading the afternoon paper, as he strides abstractedly through the iron gates, and mounts the steps of the moving train with much the same assured air of ownership as when he ascends his own porch, perhaps an hour later, far away from the hurly­burly.

Nearly all of them wear this look of their type, though in reality they are no more alike than the individuals of any other army marching in unison and car­rying knapsacks or newspapers. The guard there at the gate, who has a ticket ­punching acquaintance with all of them, soon learns to distinguish the different varieties. At the Grand Central Sta­tion, in New York, the “substantial banker” is likely to show “Greenwich” on his monthly ticket, whereas the man be­hind, who is like him, but with less substance. will probably go on to Stamford. Similarly the horsiest and yachtiest com­muters are apt to live in Larchmont, while those not quite so pronounced get off at New Rochelle. Artists and literary people arc more frequently bound for Lawrence Park, Bronxville, than for any other one place, while a variegated mob makes for Mount Vernon. But of course even to these rules there are at least enough exceptions to prove them.

Your true commuter must be by nature a man who take to routine. There are some who have commuted for a quarter century or more, and yet have not ac­quired the trick, and never will. They are the ones who write letters to the newspaper, airing their grievances against the heartless railroad corpora­tions. They are not born commuters; they have had commutation thrust upon them. But many really enjoy the life of the commuter. They like the clock-like regularity. They like the pleasant social aspect of the early morning trip to town, the neighborly interest in one another’s affairs, the ample time for reading the newspapers, which numerous city resi­dents miss by not being obliged to get an early start. They look forward to the pleasant relaxation of the whist game on the way home, with head on one side to keep the smoke out of their eyes. Some of them even say that they enjoy being awakened early in the morn­ing.

In time, all who work in New York will come to it. Meanwhile, for the man with a family it appears to be in many ways a happy solution of a difficult prob­lem. Undoubtedly it is a more whole­some existence physically, but mentally and spiritually it has the defects of it virtues when pursued all the year round. The commuter devotes the best part of the day to one narrow corner of the city; the rest of his time, not consumed on the train, is in the still more narrowing atmosphere of the suburbs. He neither gets all the way into the life of the city nor clean out into the country. So his view of things has neither the perspective of robust rurality nor the sophistication of a man in the city and of it. His return to nature is only half-way; his urbanity is suburbanity. Much of our literature, art, and especially criticism shows the taint of the commuter’s point of view.