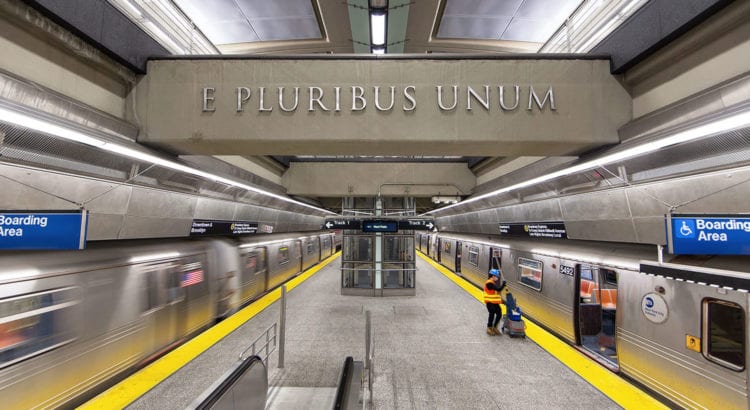 Leaders and high ranking individuals have always exerted their power by influencing the aesthetics around us. Grand Central is famous for its acorn and oak leaf motif, incorporated to please the Vanderbilts who used that symbolism as their family crest. The clock tower built at Waterbury, Connecticut’s Union Station is to this day one of the most iconic buildings in the city, but was only added to the station a year after construction had begun at the behest of the railroad’s president.

In New York we have also seen an individual lending his personal touch to some of the state’s most recent rail projects. Governor Andrew Cuomo, in these times of partisan politics and divisions over the Coronavirus, has highlighted the Latin phrase E Pluribus Unum – or “Out of Many, One.” It is one of the original mottos of the United States, appears on our country’s Great Seal, can be found printed on our money, and now can also be found in our train stations, if you know where to look.

Governor Cuomo comments about the phrase at the 2020 National Governors Association winter meeting in Washington, D.C. earlier in February:

“We’re in this hyperpartisan, hyperpolitical time, and I think sometimes, people lose the humanity of what we do in public service. We focus on labels and titles and positions, and we forget that we’re all people trying to do good things.”

“‘E pluribus unum’ really does say it all. It’s one of the great expressions, it’s on the country’s seal from the very beginning. I just proposed adding it to the seal of the State of New York this year… because it really does sum up our overall philosophy.”

Although Cuomo’s direction to add the phrase to the state’s seal and flag has come more recently, his direction to add it to infrastructure projects has been in force for several years. Along with New York’s traditional motto of Excelsior, you can find E Pluribus Unum on the Second Avenue Subway and Rochester’s Amtrak station, both opened in 2017, as well as Buffalo’s new Exchange Street Station, opened this year. 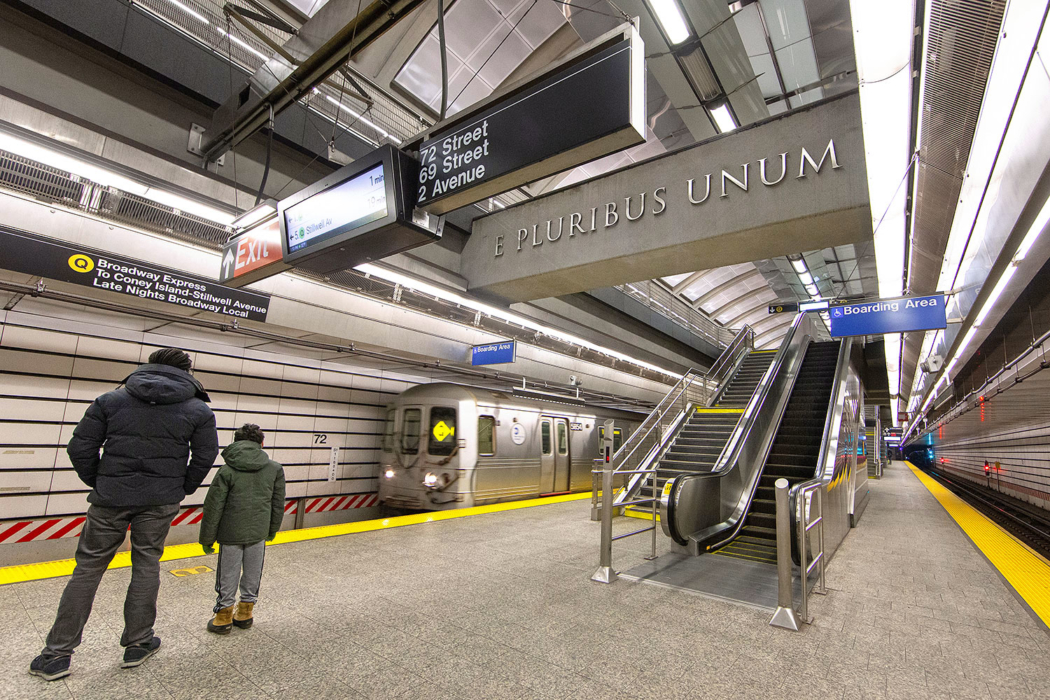 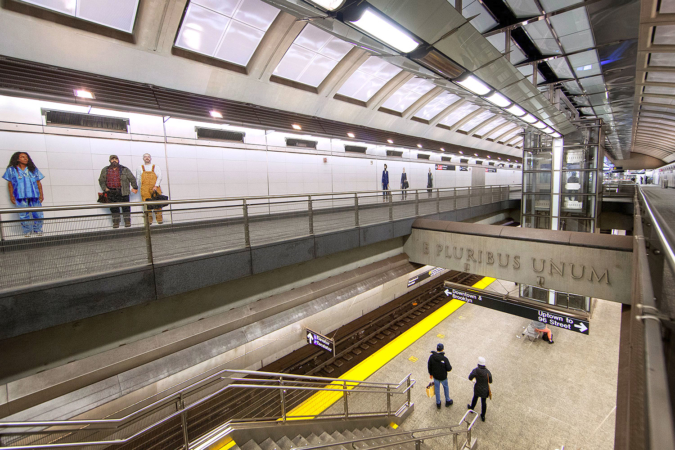 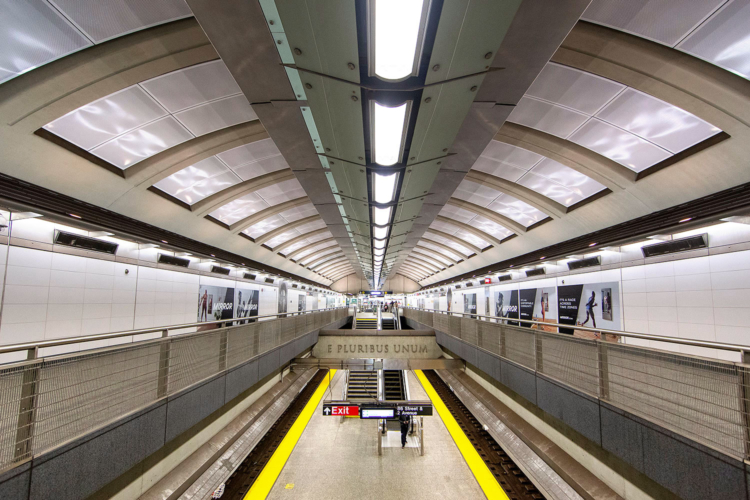 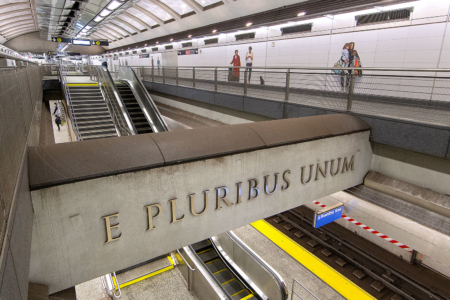 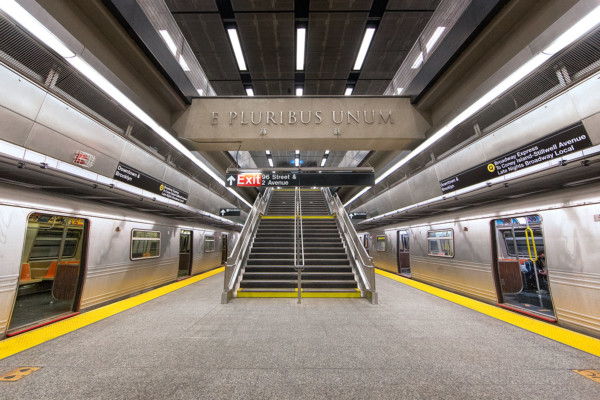 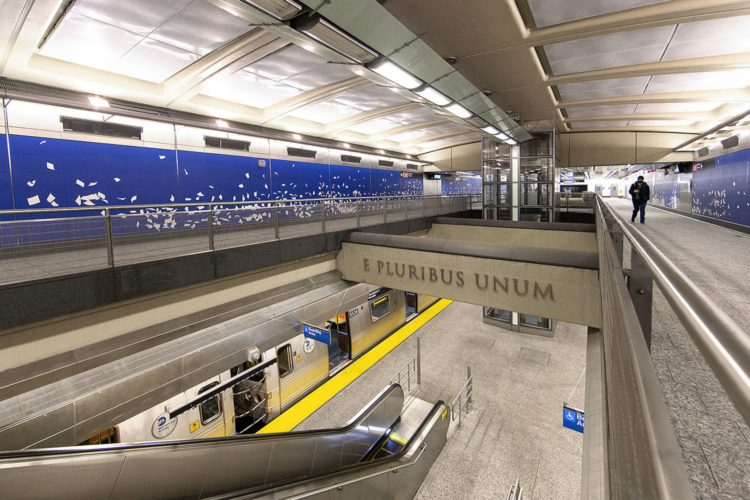 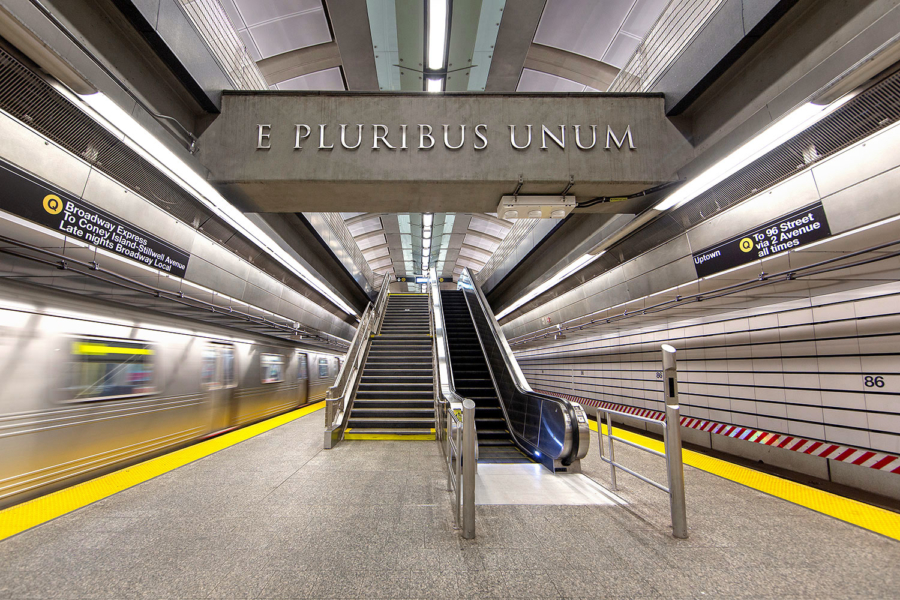 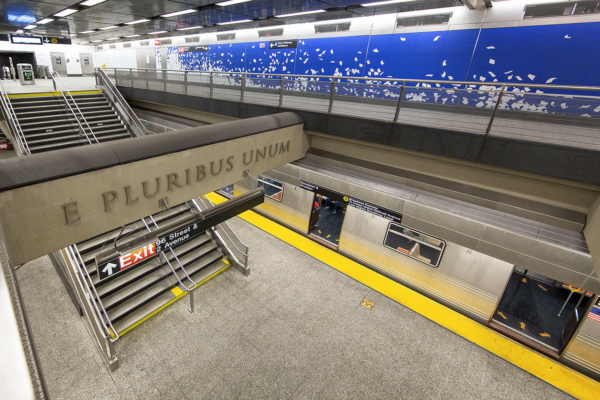 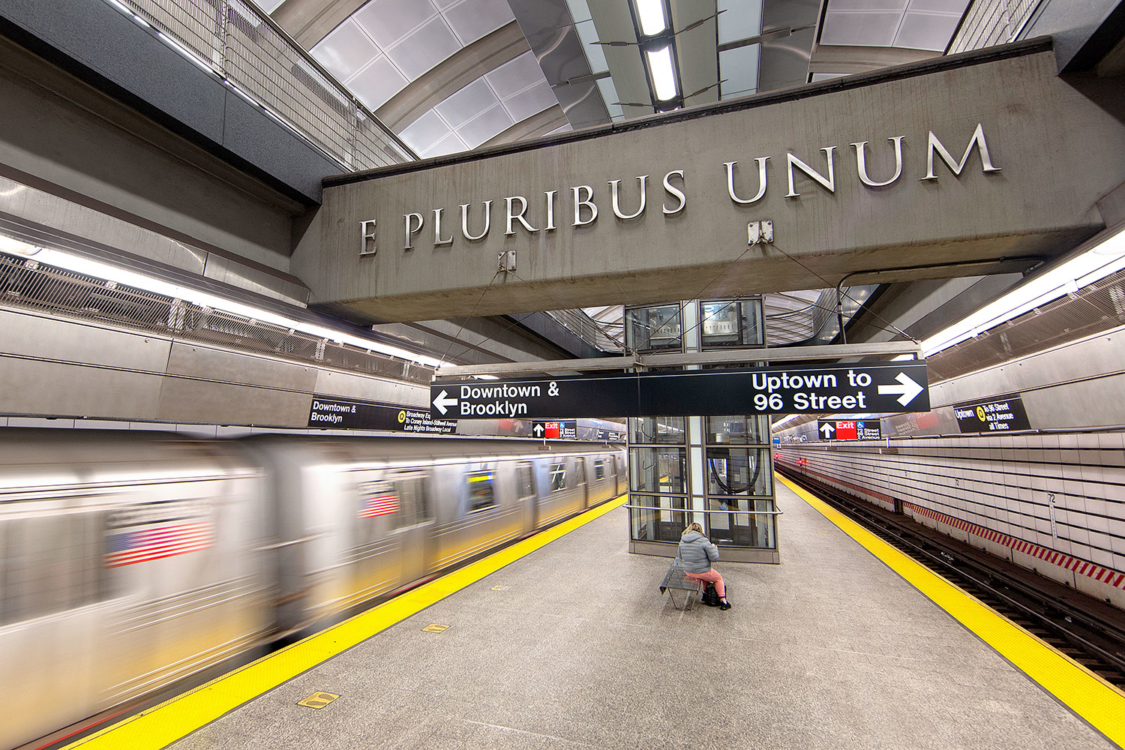 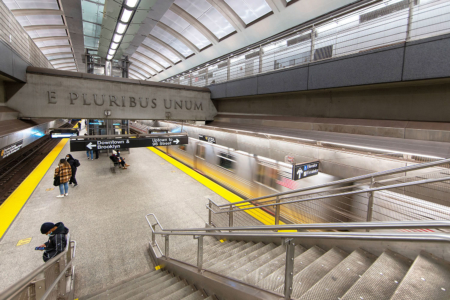 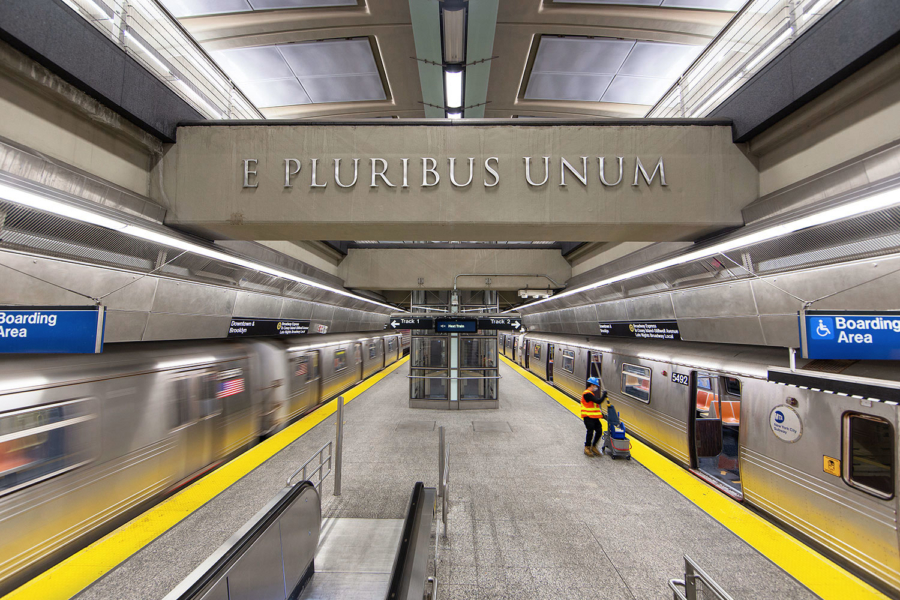 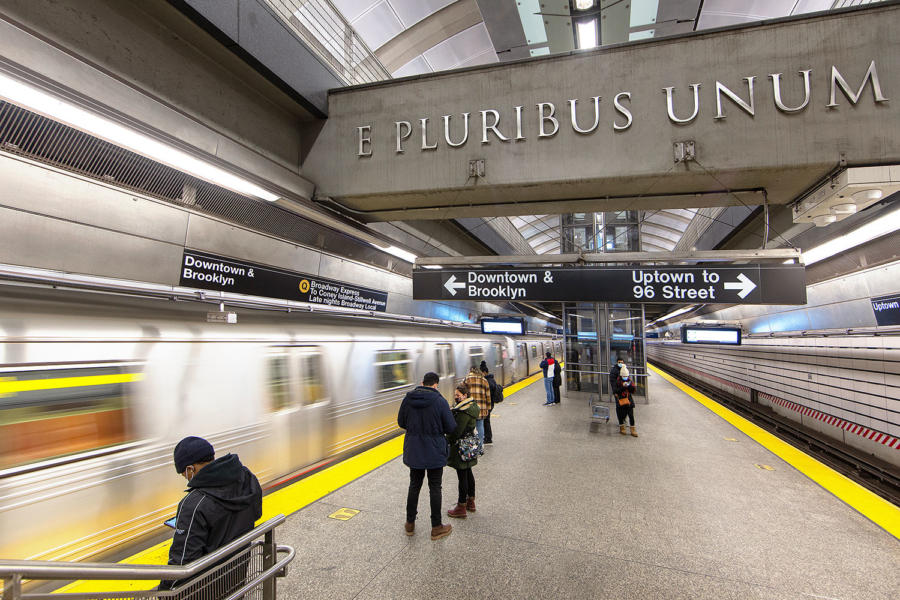 Collection of photos of the E Pluribus Unum message at the three new Second Avenue Subway stations. The phrase appears twice at each station.

Governor Andrew Cuomo on the opening of the Second Avenue Subway in 2017:

“‘E Pluribus Unum’ is displayed in the new Second Avenue Subway. The concept here was originally that we formed a country and we opened the doors. This year has been divisive. But we in New York reject the instinct to blame, divide and separate. Because the only thing that can destroy this country is in trying to divide it. Our strength is in unity.”

And, of course, there is another brand new station just days from opening that also includes the phrase… 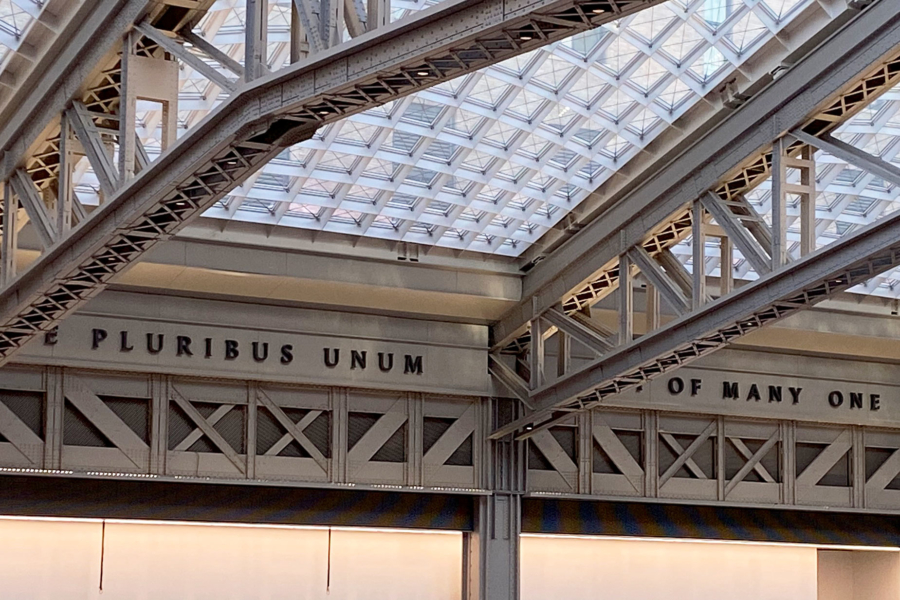 Moynihan Train Hall and its impressive glass ceiling will be a feast for the eyes!

“In this term of turmoil, let New York state remind the nation of who we are. Let’s add ‘E Pluribus Unum’ to the seal of our state [and our train stations] and proclaim at this time the simple truth that without unity, we are nothing.”

So, what do you think about E Pluribus Unum appearing in train stations? How about the new New York state flag design? Drop your comments, and any photos you may have of the phrase in your local station, in the comments section!